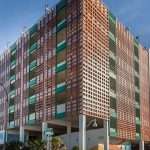 Hollywood is a city on the east coast of Florida, between Fort Lauderdale and Miami. Nearby is the Hollywood Art and Culture Center that offers contemporary exhibitions and shows. The City of Hollywood Officials developed the parking garage for public use. A modern parking lot building with 8-level perforated metal facade and 304 cells. It has an open area that goes

from 40% to 61% which allows to have the carbon dioxide produced by the vehicles quickly wind out as well as it allows sunlight to generate shadows and figures that transform this panels in a dynamic and functional facade.